Allison Hong isn’t a typical fifteen-year-old Taiwanese girl. Unwilling to bend to the conditioning of her Chinese culture, which demands that women submit to men’s will, she disobeys her father’s demand to stay in their faith tradition, Buddhism, and instead joins the Church of Jesus Christ of Latter-day Saints. Six years later, she drops out of college to serve a mission—a decision for which her father disowns her.

After serving her mission in Taiwan, Allison marries her Chinese-speaking American boyfriend, Cameron Chastain. But just over a year later, Allison returns home to their Texas apartment and is shocked to discover that Cameron has taken all their money, moved out, and filed for divorce. Desperate for love and acceptance, Allison moves to Utah and enlists in an unforgiving dating war of her own making, pitting her against the bachelorettes at Brigham Young University. It doesn’t take long before she realizes the rules she’s made up don’t make sense—and winning isn’t what she thought it would be.

Ninety-Nine Fire Hoops is for anyone who has struggled with gender inequality, racism, and immigrant injustice. Ultimately, it’s about a strong woman of color determined to create her own path. 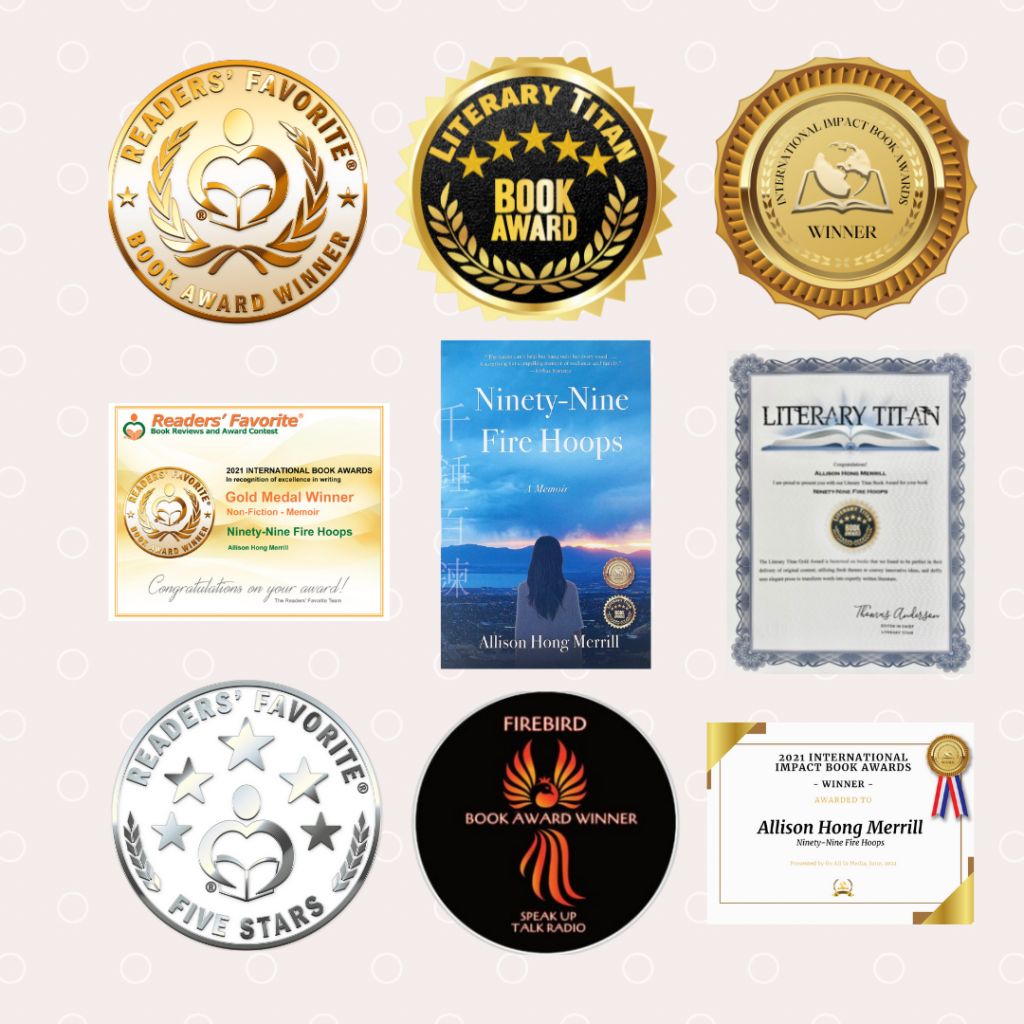 “The reader can’t help but hang onto her every word . . . A surprising but compelling memoir of resilience and family.”

“Ninety-Nine Fire Hoops is an enthralling and thought-provoking memoir . . . [A] charming aspect of the book is the beautiful representation of Taiwanese culture and Chinese history. Extensive details of rituals and traditions feel exotic . . . Merrill writes with intensity and simplicity; you cannot remain untouched.”

“Ninety-Nine Fire Hoops . . . is a poignant and compelling memoir. . . . The viewpoint [Merrill] presented was uniquely centered in religion and ethnicity yet was universal as the skillful words touched on the basics of human motivation. I finished reading the story with tears in my eyes, as it was one of the most expressive accounts I have ever read. Merrill opened my eyes to the vulnerability of the immigrant experience . . . I can recommend Ninety-Nine Fire Hoops . . . for anyone who enjoys a combination of women’s literature and a human interest story.”

“Must Read! A self-deprecating memoir, beautifully depicting the intricacies of Chinese culture and the timeless search for where one truly belongs.”
—Reedsy, 5-star review

“Ninety-Nine Fire Hoops . . . is a strong example that speaks to women’s empowerment. Following an extraordinary life journey, this memoir will provide a glimpse at one Asian-American’s life and will appeal to anyone looking for an emotionally charged and meaningful true story.

“From her journey as a fresh-off-the-boat immigrant speaking only Mandarin Chinese to her voyages . . . through different spiritual and social frames of mind, Merrill creates a powerful saga of a personal journey replete with emotionally-charged wellsprings of inheritance, discovery, and change. Hers is an exceptionally strong account of Mormon and Chinese worlds as they intersect with other cultures in different places. Readers . . . will find this story thoroughly absorbing. But what really makes Ninety-Nine Fire Hoops a standout is its concurrent consideration of the social, spiritual, and cultural forces that affect Merrill’s choices and their consequences.”

“An engaging memoir of an immigrant woman in circumstances many readers will find at once unimaginable and familiar: alone and determined. This book features strong writing, consistent, and . . . quite eloquent. [It] explores independence, maturity, faith, and love with a strong voice and narrative structure. This book tells a story more unique and intriguing than many memoirs that stumble chronologically through a relatively banal life story. . . . Supported by strong, well-paced writing, this makes for a very enjoyable read.”

“Ninety-Nine Fire Hoops is a fascinating, important, and well-developed narrative, told by a sympathetic narrator with much urgency and grace.”

––Sue William Silverman, author of How to Survive Death and Other Inconveniences

“Allison Hong Merrill makes three intertwined journeys, through family, faith, and immigration, each filled with danger, heartbreak, and ultimately joy. Watching Allison grow from fearful child and unknowing bride into her own power to love and be loved is meaningful and moving, and discovering her native Taiwan through childhood stories is fascinating. A powerful and inspiring journey from loneliness and fear to love and hope.”

––Allison K. Williams, Social Media Editor at Brevity Magazine and author of Seven Drafts: Self-Edit Like a Pro from Blank Page to Book

“Ninety-Nine Fire Hoops is a beautiful memoir that will bring you to tears and make you laugh in the same few pages. Allison Hong Merrill’s experiences growing up in Taiwan are both heart-wrenching and inspirational, as she rises from the ashes of a neglected and abused childhood, to arriving in America as a young, engaged woman, only to face harsh disappointments and broken dreams. Interwoven into the compelling scenes is Allison’s resilience that burns deep in her soul, propelling her forward a day at a time, until she can fully grasp how her trials have made her stronger, more sympathetic, and more loving. Her knack for blending her remarkable heritage with poignant insights makes this book one to absorb instead of simply reading.”

—Heather B. Moore, author of The Paper Daughters of Chinatown

“Ninety-Nine Fire Hoops follows Allison’s journey from Taiwan to Utah seeking love and belonging after a difficult childhood, marriage, and divorce. The story is heartfelt, brave, ultimately inspiring, and written in a uniquely charming voice.”

––Harrison Candelaria Fletcher, author of Presentimiento: A Life in Dreams

“Russian composer Dmitri Shostavoch said, ‘When a man is in despair, it means that he still believes in something.’ In the case of young Allison Hong Merrill, her desire to believe in something may have saved her from ultimate despair. Ninety-Nine Fire Hoops masterfully weaves stories of the author’s Chinese family, spanning two decades, intermingled with regional history, culture, and culture shock in America. A fascinating tale of both cruelty and compassion.”

“Allison Hong Merrill has a gift for writing a dramatic tale while simultaneously sharing her hard-won wisdom. Ninety-Nine Fire Hoops reads like a novel. Merrill’s story not only gives a reader a greater understanding of Chinese culture, language, and traditions but also provides insight into the human condition while building a bridge between East and West. A brilliant and beautiful debut!”

––Rev. Camilla Sanderson, author of The Mini Book of Mindfulness

“Ninety-Nine Fire Hoops is a deeply moving memoir that depicts the story of a Taiwanese immigrant bride abandoned in Texas and how she triumphs over tremendous odds to build her American dream. Allison Hong Merrill’s gift of storytelling will take you on an exciting, rewarding, and emotional journey and leave you wanting more.”

“While this is a memoir, I felt that Allison goes through a character arc, of the sort one would find in a contemporary coming of age story, but this one is much more emotional and vivid.”

“ . . . Ninety-Nine Fire Hoops is a captivating coming-of-age story of lost innocence, cultural divides, and transcendence. . . . Alongside her inspiring tale of overcoming daunting circumstances, [Hong Merrill] provides fascinating glimpses into Taiwanese customs and Mormon spiritual beliefs. . . . I learned a lot about the Mormon community, and Hong Merrill’s voice is incandescent and irresistible. By the end of the book, I wanted to adopt her.”

––Heather Diamond, author of Rabbit in the Moon

“Ninety- Nine Fire Hoops follows in the tradition of memoirs such as Frank McCourt’s Angela’s Ashes in providing a gritty, raw, and at times, profoundly shocking account of a troubled childhood in a distressing home situation. Frequently it becomes difficult to read of the cycles of abandonment that occur throughout Allison’s life and yet, there are such glimmers of kindness, that are given without asking for anything in return, that our faith in the human spirit never quite leaves us as we read her story.

Allison takes bold leaps of faith (both in the practical and spiritual sense of the term) that will leave the reader inspired. At times she follows her heart, at other decision points her profound Christian faith guides her. It becomes clear that only when the two align, will she truly find happiness.

I highly recommend this book as a fascinating insight into the life of a newly arrived immigrant in the United States, the freedom that comes with breaking societal expectations and as a testament of how faith, compassion and a determination to succeed can see us through even the hardest of times.”

“Ninety-Nine Fire Hoops is a poignant and compelling memoir. Some of the incidents are challenging, including vivid descriptions of poverty, abuse, and cultural clash. Merrill wrote so persuasively that I was able to identify with her every experience. The viewpoint she presented was uniquely centered in religion and ethnicity yet was universal as the skillful words touched on the basics of human motivation. I finished reading the story with tears in my eyes, as it was one of the most expressive accounts I have ever read. Merrill opened my eyes to the vulnerability of the immigrant experience and impressed me with the young woman’s determination to succeed. I can recommend Ninety-Nine Fire Hoops by Allison Hong Merrill for anyone who enjoys a combination of women’s literature and a human interest story.”

It’s an incredibly emotive read that will leave few hearts untouched whilst proffering a unique and inspirational perspective on the choices we make and the struggles that ultimately define us.”

“It’s a feat to which many memoir authors might aspire, but few achieve with such faultless finesse with Merrill refusing to cast herself in the role of victim. And through her openness, we are reminded of the power of faith when forced to travel the path of adversity.”

“An exceptional read, Ninety-Nine Fire Hoops is recommended without reservation.” 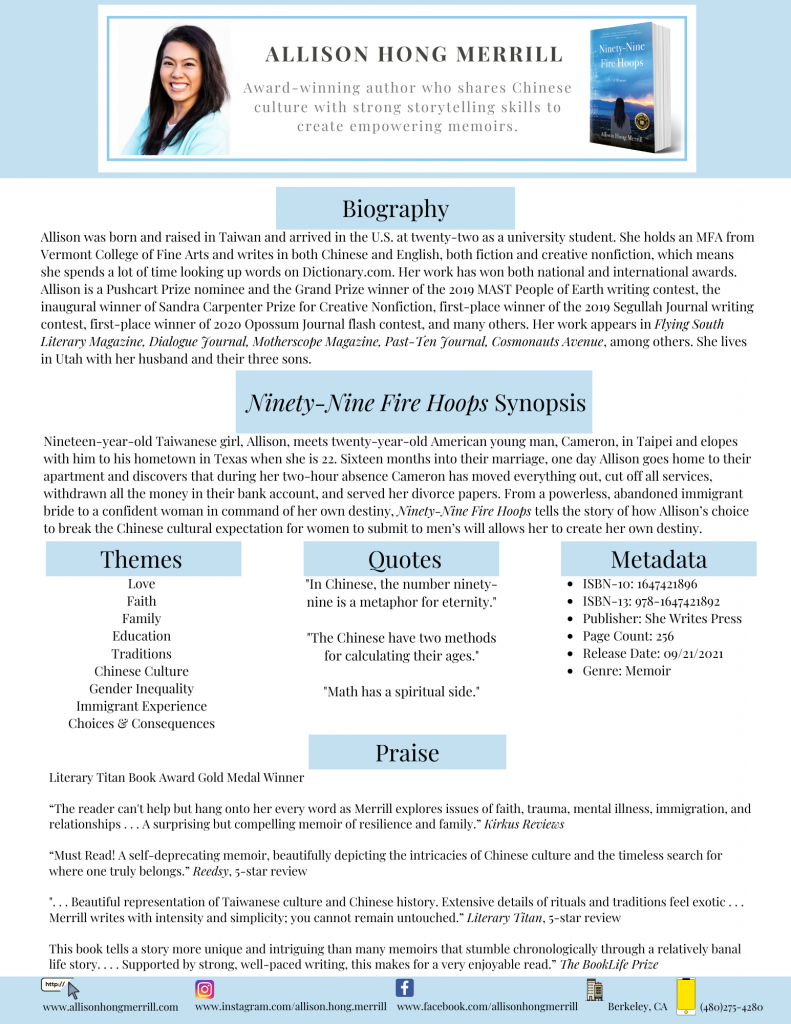 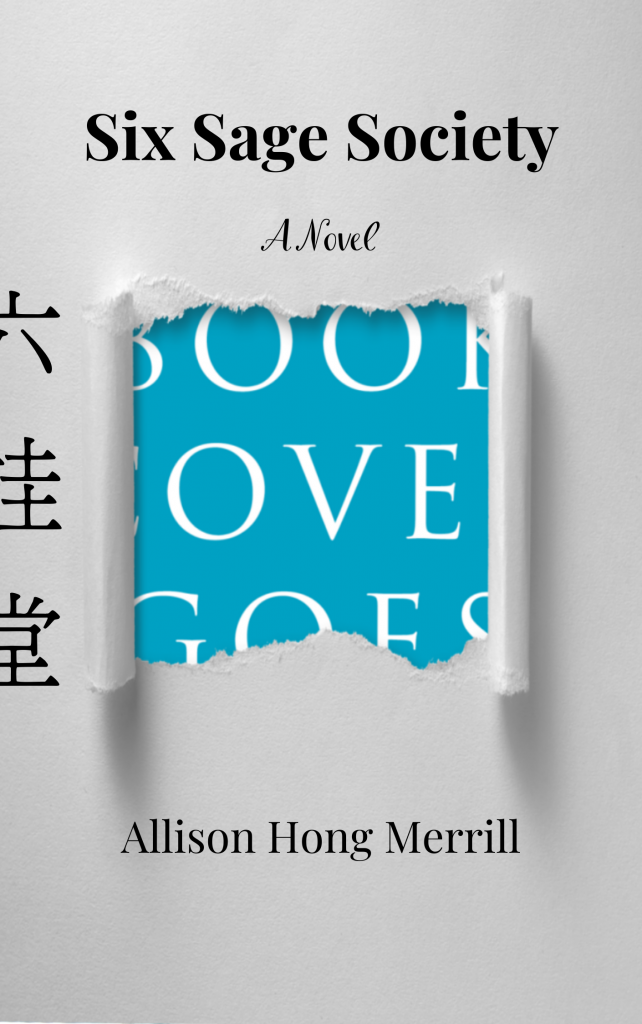 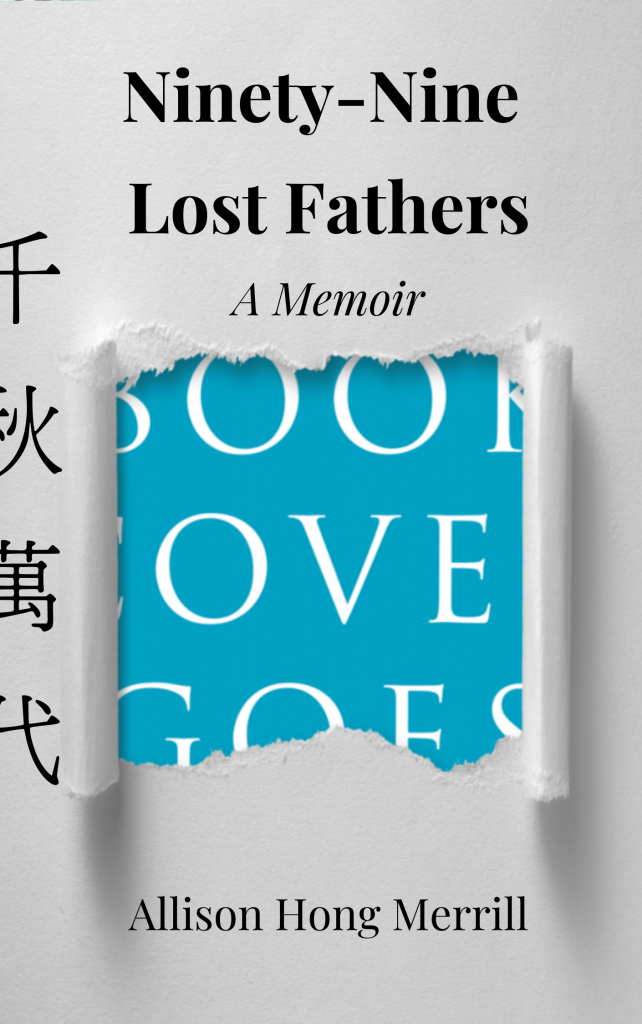